In the early 1930’s Soichiro Honda was a mechanic who worked on race cars. 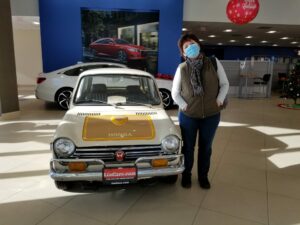 His first company made piston rings. After a few bumps, he got a big contract with Toyota. but quickly lost it because his products were poor quality.

He attended engineering school and dabbled in the field, absorbing whatever he could. He learned better ways to make a better product, ultimately winning the contract back in 1941.

In 1946 his next company employed 12 men, working in a 170 sf room. They designed and built motorized bicycles, morphing to their first motorcycles in 1949. Honda became the worlds’ largest motorcycle manufacturer in 1964, and still holds that title today.

The car pictured here is a 1971 Honda 600, the first Honda automobile approved for import to the US. (For the record, I’m just about 5’7 in my Merrells).  Here’s a review of one of these 46 year old cars for sale, in 2017. Note the author’s comments about the design, and current quality of this original, and very basic car.

I’ve driven Hondas since 1981. I was the first in my family to have a new car, and it was a very big deal. A 5-speed stick Accord sedan in metallic silver with a burgandy interior. It wasn’t quite that small, but it wasn’t showy either.

Almost 40 years, probably over a half-million miles, and I only got stuck when I forgot to turn an interior light off. Two of them probably saved my life when I got slammed into by other drivers. But you know what else I remember? The coin holder compartment on the dash was lined in velvet…to muffle the jangle of the coins.

In our loud and uber-caffeinated world, we’re constantly looking forward. It’s easy to get distracted, lose perspective or become impatient. To forget where we came from, and all the bumps we hit along the way. Or to believe what our lesser angels whisper in our ears late at night.

Seeing this 1971 car recently in the Honda showroom really resonated.  TRH is about to enter its 14th year of changing the world, one house at a time.  This car reminded me everyone starts somewhere, That growth happens and goals are met when we stay true to what we believe to be important. And that whatever we do, doing the best we can, from Day One is a noble pursuit. 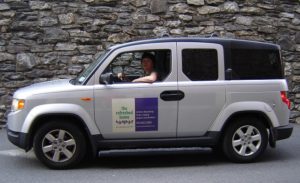 And  BTW, we were in the showroom only because Doug was buying a truck.

At 115K miles Elle (the Element) is just getting broken in!